skip to main | skip to sidebar

Welcome back everyone; we hope you've had a safe & successful Thanksgiving Week both in the deer woods and with family. Damin and I surely had a busy week followed by an even busier week at school so accept our apology for our lack of posting!

I thought I’d take this little time to share how our hunting went over the Thanksgiving break. It started off with a bang for me on Friday afternoon as I was hunting a particular buck that we had caught on the trail camera just days before. This buck, nicknamed Hulk (pictured), sports a massive, powerful body that I believe weighs over 200lbs. on the hoof! He is a mainframe 8 the best I can tell and I would guess him to gross in the low 130s. However, what attracted me to the Hulk was his enormous frame! This buck is without a doubt a 4.5 year old deer, making him a real challenge to hunt. In fact, I was talking with Damin on the phone just that day telling him of my plans to TRY to pass on Lefty or the Dark Knight so I could increase my chances and time afield for Hulk.

Anyway, I was perched up high in a Gorilla Hang On stand overlooking a network of doe trails that ironically, was just 60 yards from where Hulk was caught on film. It was a cold, blustery afternoon with the temperature in the high teens and the wind chill around zero. And, I’m not going to lie, for the first time in my hunting career I actually got cold! I was clearly under-dressed and it affected me mentally and physically on stand. I went through almost an entire bag of shelled walnuts to keep my metabolism high and give my body some energy to create warmth. Still, I kept telling myself, “Cody, this is primetime, we have a giant working this area, tough it out!” So I continued to fight the cold and after seeing a couple does browsing two does came bursting out of an oak flat and I was sure Hulk was to follow.

I immediately grabbed by Traditions Pursuit II ready for the shot, however, no buck followed. I was sure there was buck in the oaks simply because nothing else would cause the two previous does to act the way they did. Almost two hours had passed without a deer and I was about ready to get down and surrender to the cold when a doe and a massive buck came out of the same oak flat. I glassed him out and, while trying to honor my promise to Damin, wanted to make sure it was Hulk, and it was! Unfortunately, as is often the case during the chase phase, he did not present a shot. He was too busy dogging the doe back and forth and would not allow me to get a shot off. Oh well, he did not get that big and old by being dumb.

In hindsight, I wish I would have handled the differently in two aspects. For one I would have dressed warmer, obviously. And for two, when the first two does were chased out of the oaks, I wished I would have become pro active and did some serious grunting and rattling. I KNEW there was a buck out there, but I chose to be patient and wait for him to come to me. Had I been able to call him in he may have presented a makeable shot as he would have likely actually stayed still! Regardless, it was an extremely exciting hunt simply because we caught him on camera had the stand hung specifically for a buck of his caliber, it just didn’t come together but hey that is hunting!

The remainder of the week was pretty uneventful for me personally. Damin, however, did have a quick encounter with what we believe was the Hulk as well. He was still at it chasing a doe and was in and out before Damin could even shoulder his rifle. Damin also saw several good looking 1.5 year old bucks that we are hoping will survive to mature into shooters in the next 2-3 years. To the best of our knowledge though, we do know Hulk is still out there and actually as I finish this post, I am going to go do a little scouting to better our chances to tagging this bad boy during the late season.

Another hunter was fortunate enough to take a buck off the property over the break. While we did not get to actually see the deer in person it looked eerily similar to a 3 year old 8 point I had passed on the week before at 55 yards because I felt he needed another year. He had a suitable rack, the hunter guessed him to score 110”, but I felt his body size put him behind most 3 year olds and that another year would catapult him into shooter status. Oh well, that is just simply the way it goes sometimes!

While Damin and I had a roller coaster time in stand over the break we enjoyed some fine eating, time with family and a little catching up. So I would have to give our week an A+, because remember, very rarely is hunting about the actual taking of a deer. We hope you guys are having a successful season out there and are settling down in time for the holidays. God Bless and Happy Hunting.
Posted by Obsessing Over the Obesession at 11:46 AM 5 comments: 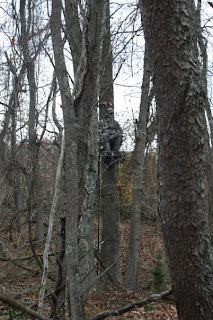 A lot is made these days of different camouflage patterns and their effectiveness in the deer woods. And, while it is important to remember one's background, silhouette and other environmental factors, camouflage with respects to hunting hardwood treestands has been taken to a new level with Mossy Oak's Treedstand camo pattern.

Originally introduced 20 years ago, Mossy Oak has reintroduced this wonderful pattern that "utilizes digital technology to exactly reproduce the details and subtleties of actual tree limbs laid over the neutral tones most commonly seen when looking up through bare trees." I've got to admit, both Cody and I were a bit skeptical as to just how effective the pattern would be. However, after spending some time in the woods with a camera, we've found just how great this pattern is!
Posted by Obsessing Over the Obesession at 12:33 PM 2 comments:

Obsessing Over the Obesession
Cody and Damin-- Two brothers obsessed with producing, chasing, harvesting and most importantly understanding trophy whitetails.